lthough you can find churros con chocolate in a hundred stores throughout Madrid, Chocolatería San Gines is by far the most famous location in the city and as such needed a spot on the map of this blog!

While Spain has a long list of beautiful holidays, traditions and recipes, “churros con chocolate” has made a worldwide reputation for itself, and for good reason. I don’t exactly know why, but the first time I was in Spain for a 4 long summer, I didn’t even try churros until my last month in the country. I think initially they seemed to simple to be tempting. The colorful and fluffy pastries always managed to seduce me….

After trying my first churros I was kicking myself for having waited so long knowing that I only had a few measly weeks left to enjoy as many of these delicious little sticks as I could. I probably consumed more churros con chocolate in those 4 weeks than any Spanish native ever has before. And yes…I paid the price. I arrived home a bit puffier and rounder than when I had left, but I’ll tell you it was so worth it and thankfully no one seemed to notice (or at least comment) that I was looking any different than when I first jumped on my plane to Madrid.

Nuzzled between the winding streets of the city center Sol you’ll find an unassuming café with a line wrapping around the street. If you’re lucky, and find yourself strolling up to the doors with no line in sight, then thank your lucky stars and grab a table before the masses arrive. But, even with a long line, they have mastered the art of taking and preparing orders quickly. The real challenge is stalking those who are already seated, locating the party most likely to leave soonest and then pouncing on their table the second their bums lift off from their seats.

The only time I ever visited and discovered no line and plenty of free tables was at 5AM in the morning after a fun night out with my friend Val (also a pro soccer player in Spain) and my best friend Walley who has flown out to visit me! Let me tell you, churros con chocolate is delicious no matter when you have it, but after a night of drinking and wandering up and down the cobblestone streets of Madrid freezing as you laugh with friends, nothing is as warming, rejuvenating and delectable as a boiling cup of chocolate with warm, crispy churros.

Americans drink coffee to cure hangovers….Spaniards drink steaming hot chocolate. From my humble experience the chocolate was way more effective at curing hangover symptoms. Either than or the alcohol headache was just numbed by a sugar overdose and I couldn’t tell the difference…

One of my favorite stories from San Gines was when I took Omid there during one of his visits. We were enjoying out churros late in the night with just a few other tables full of other visitors. A gentleman approached us with a huge bouquet full of long-stem red roses and was rather forcefully “asking” Omid to purchase one for me.

Always one for extravagance he asked the man how much for the whole bouquet. Pausing to calculate for a second he replied, in very broken English, 40 euros. Omid pulled out a $100 bill and gave it to the man asking for his change. Eyes widening at the site of the crisp bill he quickly handed the Omid the entire bouquet and booked it down the street without a second glance back at us.

Everyone in the alleyway watching the event was left wide-eyed as well and one woman, bless her sweet heart, even yelled at the man saying he needed to give us our change as he sprinted into the darkness. We all looked around at each other and just started laughing and Omid proceeded to hand out roses to each of the women in the alley with us. Melting my heart and about 10 others with it….

I was a frequent visitor to San Gines during my time in Spain and took everyone who ever visited me there as well.  If you are at all into history and culture then this is definitely a place worth visiting. I mean yeah, the castle is cool and all but can you get history and a piping cup of thick chocolate with your tour of the grounds? San Gines is a walk through history AND a delicious dessert and I’ll take that every time. You can read a bit about their history below and on their own site (although you may have to translate from Spanish to your language).

Founded in 1894, San Gines is one of the oldest chocolate shops in Madrid. Not having changed much over the past century, the design of San Gines mirrors 19th century cafes with an upper originally dedicated to taking orders and catering to the folks who weren’t planning on staying for long and a second room below. This room was known as the “chat room” where those wishing to linger over their chocolate and churros while gossping away with friends could sit for hours on end.

In the early years of its existence, San Gines was visited by the local scholars and artists and had a reputation as being a place where you could find many an educated person slurping away on their cups of molten chocolate. After the many other shops lining the streets of Madrid had closed down for the night, locals knew they could always stop by San Gines no matter what time of day (or night) for a steaming cup of hot chocolate and freshly made churros.

With the passing of time, San Gines has gained an avid following of churros con chocolate addicts (myself included) and continues to deliver delicious churros day in and day out for over a century now. Producing over 4,000 fresh churros daily, San Gines always has another drooling mouth to satiate with their incredible desserts.

For any traveling to Madrid I hope you get a chance to stop by and experience the history of Chocolatería San Gines. Have any of you ever been?? 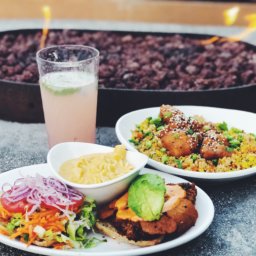 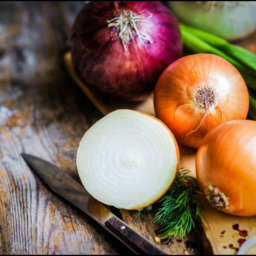 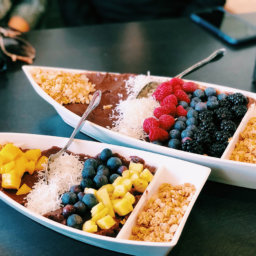 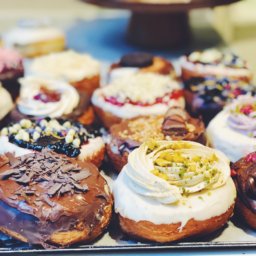 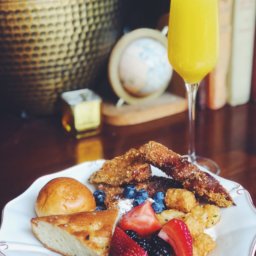 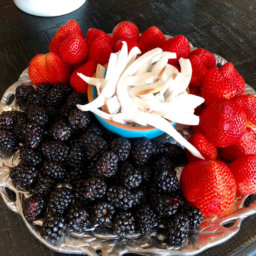 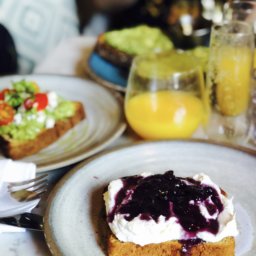 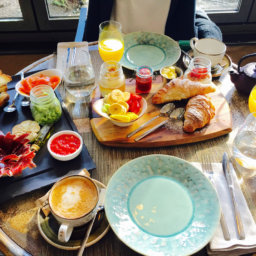 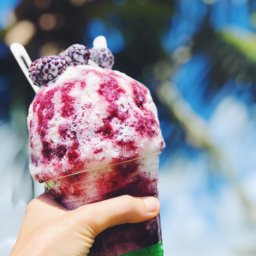 I remember the waiter carrying a plate with 9 cups of chocolate pilled 3 high with the churros stacked on top. What an experience to sit out in the ancient streets enjoying the same treat that has been eaten for centuries.

Such a fun place to be to really be surrounded by the genuine ambiance of Spanish culture. With the chocolateria tucked between tiny streets and the uneven cobblestone pavement. If you’re lucky there will be someone playing a guitar nearby to make the experience even more memorable and authentic. 🙂

Cristina - Memories of the Pacific
Reply

I love this place! I’m Spanish and even though it’s quite touristy I still like to go there. It’s really packed during winter but definitely worth the wait 🙂

Yes! I think that is one of the reasons I love San Gines so much. Because it is historical and popular, but still such great quality! Thanks for commenting Cristina!